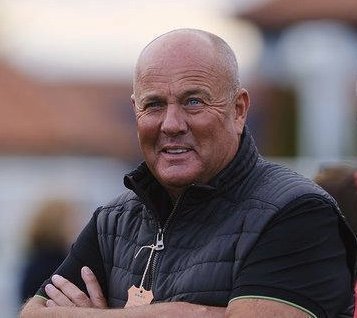 " From my first winner i was hooked "

So it all started for me in 2008 when I was visiting a friend of mine who lived in Lambourn, and as you do we went out for dinner at the local pub The Pheasant, this is where I was introduced to the owner Johnny The Fish who also ran a horse racing syndicate, by the end of the night he had talked me into buying a share in a horse, He ran a few week later and won easily since then I’ve been hooked.  The horse was called First Point and was trained by Nicky Henderson, he won a total of 7 times and earned over £52,000 in prize money

Spending more time in Lambourn visiting the stable and friends we used to drink in the Malt Shovel where all the jockeys and trainers used to drink, this is where I met a great friend of mine Oliver Taggart who owned the pub. One day he introduced me to a trainer called Stan Moore, a few weeks later I had bought my first horse and Stan trained this for me, he was called Hold The Bucks he was a real tough horse who earned his name as he was always bucking and kicking. He ran 33 times for us winning 5 times and placed 9 times over 3 years then he was sold to go jumping where he also won a few times.  During our time with Stan Moore we had numerous other horses one was called Exceed the Wildman who had 20 runs winning 4 times and being placed 7 times with a rating of 86, he came 3rd to Workforce on his second start,

We also had Señor Sassi and a horse called Mnarani who was in the same race when Exceed the Wildman , We had a share in other horses Officer in Command and Fullback, Fullback was a nice horse who was rated 93 and gave us the opportunity to go to Nad Al Sheba with him. Officer in Command was rated 82 and he won plenty of times too..

It took me a couple of years to build up the courage to go to the sales and buy my own horses and the first horse I purchased was a footstepinthesands colt who we called Sonoran Sands he only won 3 races but was rated 97, he took us to Meydan and he was out there for 3 months entered in all the big races and came 4th in a listed race he collected some nice prize money as well.

During the summer of 2011 after a great day of racing a Newmarket me and a few friends got invited for a few more drinks at there local pub The Boot just outside Newmarket, Where I got chatting to a man at the bar called Pete we got on great and had a good laugh, it turned out to be dual derby winning trainer Peter Chapple Hyam I still didn’t know who he was until I got home and searched him on the internet. I had out grown my current trainer and a move was on the cards. It was around a month later i gave Pete a call and sent him Sonoran Sands.

In 2012 I had a right touch, I had seen a yearling for sale off a trainer I knew so I called him up but he wouldn’t sell him to me, So I got my Moroccan friend to call him up a few weeks later and told him he was a Lebanese Fishing Tycoon with Millions and wanted to get into horse racing and that someone had recommended him , BINGO he offered to sell him the horse I wanted, I sent my daughter to London to make the bank transfer for the horse as if it was at my local bank I think he might of caught on. The deal was the horse had to stay in training with him thou. The sale went through with out a hiccup buy the way the horse was only £8,000. A few weeks went past with the training telling everyone he had a new Lebanese Fishing Millionaire as his new big owner. Then I sent someone to go and collect the horse and send him to Pete’s. The horse turned out to be MAXENTIUS the 3rd best 2 year old in Europe in 2012. He won his first 2 races and then came 3rd in the Champagne Stakes Group 2 at Newmarket with Olympic Glory winning, the the going that day was heavy and the Jockey said if the ground was good we would of won. After the Champagne Stakes we was offered $300,000 dollars for 50% of the horse but he had to go to America, After a long hard think I declined the offer. If it’s one thing I have learnt in racing is to sell if you get a good enough offer.

A year later on in 2013 I purchased a horse who I named Farquhar who had a top rating of 98, He had to be dropped out the back and come though the field he had an amazing turn of foot but would need a bit of luck in running, He would of been a top class flat horse / jumper if he didn’t get injured, He beat some great horse such as Penhill and Battersea who went on to be top class horses, He won his maiden easily and we was offered £100,000 for him straight away, I couldn’t turn this kind of money down again after Maxentius, But a friend of mine then offered to buy half for £50,000 so I did that instead, His highlight was winning the Betfred TV Stakes in 2014 at Newmarket where he won over £60,000 in prize money for that one race, He should of won the Bet365 Old Newton Cup at Haycock a month later but the Jockey didn’t listen to instructions he was flying at the end but was too late and finished 3rd.

Later on in 2013 we got Yeah Baby which we bought at a charity auction a lovely breed filly out of Danehill Dancer who was trained by Charlie Hills he managed to get her to win a race and was placed a few times as well.

In 2014 we bought a lovely Teofilo colt who we named Medalla De Oro this was the start of the syndicate there was 12 of us to start out with all friends who loved a days racing, we have just retired him and he was picking up a few small injuries here and there, he will always be one of my favourite horses, He has won both on the flat and over jumps the highlight for me is him winning the Amateur Derby at Epsom, his highest rating has been 90 and shows real promise over the jumps winning his maiden hurdle with ease.

Over the next few years we had numerous other horses with Pete a few winners here and there but it felt like the place lost its spark for me, We had the best days out you could ever imagine during my time there but it was time to move on in December 2018 we all agreed and decided on a move to a young ambitious trainer called Tom Clover and we haven’t looked back since, We sent the 5 horse we had left in training to Tom and we had our first runner with him on the 8th December with Crimewave who came 2nd to New King at Wolverhampton, Crimewave has since gone on to win 3 races and placed 8 times only rarely being out the top 5  which is credit to the horse and trainer. He has had a top rating of 85 and plenty more wins left in him.

One of the horses we sent to Tom was an Australia yearling who is named Holy Kingdom who I purchased at the tattersalls yearling sales. From day one Pete told us this horse could be special but will need time, We have been very patient with this horse and has had some great runs winning 3 races and being placed 5 times with a rating of 101 and just under £50,000 in prize money he is our superstar, unfortunately he suffered an injury this year and will need plenty of time to recover, fingers crossed he will be back on the race course soon. a couple of the horses which he beat have gone on to win group races out in Dubai,  so thats how good he was and was only just coming into his prime.

We then went on to buy Eaglesglen probably the best looking horse who i have ever seen, he suffered a set back on his maiden run and been a slow road to recovery, We got him to win a race and has since been gelded he is now on top form a look forward to a good campaign on the turf this season, The other horse we bought was Rogue Assassin an IFFRAAJ colt who won his maiden at 40/1 he will be aimed at a 6f campaign on the turf this season.

2020 was our biggest year so far with now over 100 members and 12 horses, the most recent 4 horse syndicate will probably be the best bunch of horses i will ever buy, Rockett Man and Rogue Force have already won with Cash Machine coming 2nd in his maiden, Rogue Bear could be something special and won’t be far away from a run, Sugauli looks to be another good horse we have purchased, winning his maiden in good style and will be aimed at all the big handicaps this year