The Talent That Drives Rogues' Gallery 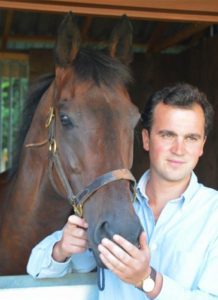 TOM CLOVER is the new up and coming trainer in Newmarket launched at the end of 2016 by Tom and his wife Jackie.

Tom and Jackie both bring expertise, experience and enthusiasm to their enterprise which is based in Newmarket – the historic home of horseracing.

Tom and his family have been around horses most of their lives. He rode in point-to-points as a young man and, after gaining a diploma from the Royal Agricultural College in Cirencester, started out as a pupil assistant with jumps trainer Charlie Longsdon. Tom soon stepped up to assistant trainer as the operation doubled in size.

With a desire to develop his skills, he came to trainer David Simcock’s stable in Newmarket. What was meant to be a one-summer placement extended into five seasons as assistant in which Tom extensively learnt from David, who is renowned for maximising each horse’s potential.

That stint has proved the ideal grounding for launching his business with Jackie, who herself grew up in one of the most famous stables in Newmarket – Kremlin House. Her father Michael Jarvis won the Prix de l’Arc de Triomphe, the 1,000 Guineas and the Oaks among many other top prizes in the sport as Jackie witnessed first-hand all the ingredients that are required to sustain a first-class training operation.
” Rogues Gallery Racing encompasses what is great about our sport.  They have an infectious enthusiasm for racing and welcome everyone with open arms.  They represent brilliant value for money with the focus being to buy quality racehorses to compete at the best meetings.  Their regular yard visits are always huge fun and it is a privilege to train for them “ 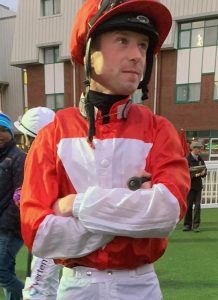 Jack Mitchell started of as apprentice to Peter Chapple-Hyam and received media coverage as one of the best up and coming jockeys, he burst onto the scene in 2010 after winning the Derby Dash at the Epsom Derby meeting, even after his saddle slipping through the race. Jack is a multiple group winning jockey and most recently winning the German St Ledger, Jack is normally around when we have our mornings down the gallops and gives us some great updates on our horses. Jack has just won on Madella De Oro twice on the bounce and was just beat a short head for his hatrick.

“I have known the Rogues Gallery and Tony for a few years now and have rode plenty of winners for them. I go and sit on all the horses down the gallops as well, They are a professional set up and have had some fantastic horses over the years. I look forward to riding many more winners for them. 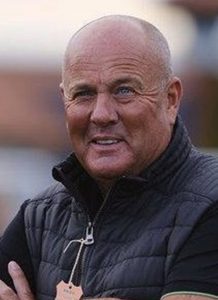 Rogues Gallery Syndicate is run by Mr Tony Elliott who has been involved in horse racing for the past 13 years. He has owned and been involved with some fantastic horses which has taken him to Hong Kong, Dubai, Turkey , U.S.A and not to mention the U.K. He has won the Betfred TV Stakes with a horse called FARQUAR, the prize money was a £100,000, he also had the 3rd best 2 year old in EUROPE in 2012 with a horse called MAXENTIUS who won both his maidens before coming 3rd in the Champagne Stakes against a well known horses OLYMPIC GLORY, and TORONADO at Doncaster he was later sold to QUATAR.
Our aim is simple, we only purchase well bred horses with plenty of scope for the future.
We offer a unique opportunity to get involved in horse racing and race horse ownership, we provide weekly updates on the horses, stable visits are arranged on a monthly basis where you can get up close and personal with the horses, trainers and stable staff as well as watching the horses on the morning gallops.
On race day we supply you with a fantastic day out with owners and trainer passes to get you in the parade ring with the trainers and jockeys and hopefully the winners enclosure. We guarantee you a fantastic time and a good laugh along the way, you will not be disappointed.
Rogues Gallery Racing is not like most other racing syndicates, this is a non profit making syndicate and is done purely for the love of racing. 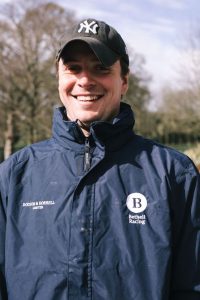 An accomplished rider and horseman, Edward began his work experience with bloodstock agent James Delahooke, the man who unearthed champion Dancing Brave for Prince Khalid Abdullah. He then spent several months under the tutelage of Newmarket maestro William Haggas, whose string at the time included top-class duo Mukhadram and Dancing Rain.

A pupil assistant role with Australian legend Gai Waterhouse saw Edward enjoy seven months down under. He assisted with the breaking in of yearlings, rode track work on some of the best horses in the yard, saddled runners at the races, and helped with all aspects of office work, from race planning to writing blogs for the trainer’s website.

In April 2016, Edward became assistant trainer to Charlie Hills in Lambourn, working with a number of high-class performers including outstanding sprinter Battaash. From there he went to work for Francois Rohaut in France, helping to manage a stable of 120 horses, riding out, travelling horses to the races and writing monthly horse reports. More recently Edward has acted as assistant trainer to Robert Cowell just outside of Newmarket.

Edd is based at Thorngill, Middleham and is our Northern Trainer. 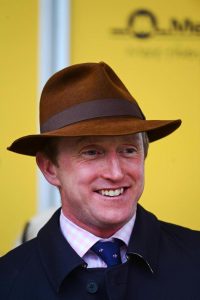 Set on the highest point of the Berkshire downs overlooking Lambourn – ‘The Valley of the Racehorse’ is Hill Barn Stables, home to Grade 1 & Cheltenham Festival winning trainer Harry Whittington.  An extremely talented horseman with a wealth of experience within the equine industry.  Harry and his wife Alice work alongside a young and ambitious team, striving to produce an environment where each individual horse is encouraged to reach their full potential.  With access to some of the finest facilities in the country, a truly unique training environment is achieved.  Now in their ninth season in training, they are always endeavouring to improve on their successes, building the operation and bringing continued enjoyment to owners, sponsors and all the team.